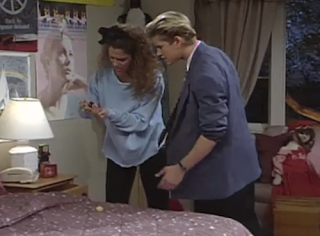 TV of the 1980s is famous for its "very special" episodes, those well-intentioned, hyper-earnest, and tonally-dissonant stories which often broke the mold of the show, however briefly, to impart a lesson on an important real-world issue to the viewers. Substance abuse, sexual assault, teen pregnancy and suicide are just a few of the issues tackled in these 30-60 minutes chunks (with commercials, of course), all couched in the implicit, soothing promise that by episode's end, everything would be back to normal for the characters. Think of the time Maude had an abortion, or Alex Keaton got high on speed, or, yes, when Jessie Spano got high on...caffeine.

In this podcast, the hosts of Saved by the Bell Reviewed and friends will review those kinds of episodes, from the famous to the infamous to the lesser known. But we won't be limited to just television; rather, we will cover "very special episodes" from across pop culture, be they movies, music, comic books or more. Any time pop culture interrupts itself to teach, sermonize, or (attempt to) inspire, however earnestly or effectively (or not), we'll be there, to dissect, discuss, celebrate and/or mock it.

There will probably also be some poop jokes.

As always, we want to hear from you, the listeners. Let us know how we're doing, which of the hosts is your favorite, and make suggestions on very special episodes to cover in the future. You can email us at avsepodcast@gmail.com, follow the show on Twitter @AVSEPod, and drop us a line on our Facebook page.

We hope you enjoy the show!
Posted by Austin Gorton at 3:05 PM